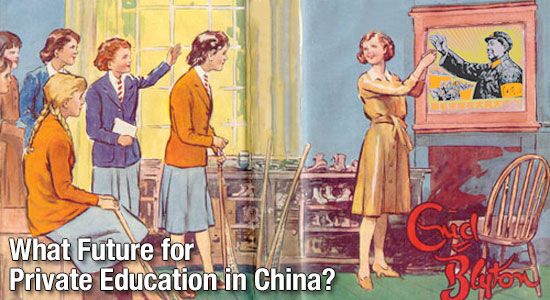 What is the Future for Private Education in China?

There is a solid and increasing demand for private education in China. China is ranked ninth in a list of countries with the most expensive private schools (Australia is fourth, ahead of the USA at fifth) (CNBC, 2012). The country’s private education market is expected to grow to nearly $80 billion by 2012 from $60 billion in 2009 (CNBC, 2012). Spending on education is the third largest spending class of rich Chinese. (Brennan, 2012)

Private education is a market that was disbanded, then obliterated, and now reignited as the Chinese have become wealthier and more strain is felt on the public system. More parents each year are sending their child overseas for a better, more prestigious education. Those staying in China have the options of private schools. Their are a few reasons parents send their child to private schools in China - prestige, better prospects, better environment, and to avoid the Gaokou (Chinese College Entrance Exams).

Despite the demand and popularity, their are still issues with private schools - Mainly they are only wish to maximize profits at the expense of student facilities and teaching staff. Only a few established private schools are over 15 years old, and over half the private schools in China have disappeared over this time. These are negative perceptions private schools need to address, but overall, the negatives are far overshadowed by the positive perceptions of private education, and further growth is expected.

Why Private Education?
When the communists took power in 1949, all 2,200 of the countries private schools were closed in the pursuit of egalitarianism, socialism and social control (Kwong, 1997, p252). Private Schools, despite quality education, were difficult to control and catered to the bourgeoisie, and were often run by foriegn religious organizations. At the time, China’s population was 80 percent illiterate, enrollment was available to less that 40 percent, to only 20 percent of school age children (Hannum, 1999 p 195).

Education was a communist success story. By the fifties, education was free or low cost, catering to the needs of local communities. Graduates usually worked in the community or sponsors work units (Kwong, 1997, p244).

The achievements of the government’s education policies were quickly eradicated during the 1966 - 1976 Cultural Revolution. Teachers were persecuted and schools were destroyed. What little education structure maintained focussed on ideological indoctrination over practical application. After the Cultural Revolution and in introduction of free market reforms, Deng Xiaopeng acknowledged the need for private education providers - “Education should face modernization, the world, and the future.” (Zhang, 2003, p1). The goal now for education was to improve productivity, not “egalitarian ideology” (Cheng, 1996).

Why have private schools succeeded?
Three major problems have been identified by the government in China’s education system (People’s Daily Online, 2009)

Other problems include rigid curriculum, exams, no autonomy and inequality. The government does allows ‘key schools’ to receive extra funding, but these schools are very selective. (Cheng, DeLany, 1999, p49-50)

Private schools offer an alternative, and more placements, accredited education, and with a focus on skills, greater chances at post graduate employment.

They found an attitude where private education is “neither authentic nor trustworthy but profit-oriented so that it could not provide high-quality education.” (Zhou, Zhouxu, 2007, p 109). In a poll conducted by Private Education Web and Private Higher Education Committee of China found half of the 1134 private institutions in 2001 were no longer operational. “10% merged with other institutions and there were no less than 40% running smoothly” (Zhou, Zhouxu, 2007, p 104).

Conflicts and challenges in the education market
Inequality: As China abandons its egalitarian ambitions for the free market, "parents see private schools as a mechanism for adapting students to the requirements of hierarchical social structure and the demands of the occupational marketplace" (Cheng, DeLany, 1999, p53). Poor and rural schools will never be able to compete with these schools faculty and facilities, and therefore, opportunities. So rather than being a force for positive social change, education creates the unequal society that fermented dissent and revolution of Republican China.

Incomplete and inconsistent laws: Incomplete laws, cultural and language barriers, and poor co-ordination amongst institutions have hindered the quality of education. It is against Chinese law for a private school to be driven more by commercial, over academic motivations, but is difficult to enforce (Ozturgut, 2011, p6).

No product development: Schools need to build on their brand and brand awareness to remain successful, but it would be insufficient to rely on marketing alone. The focus should be on enhancing the product, rather than expansion. (Chen, L, Li, I & Rask, C 2012, p17). Attracting top academics and education experts on long term contracts are needed to build on a school’s brand.

Problems in the public system: Strong and growing dissatisfaction with public education benefits the private sector. The Chinese College Entrance Exams (“Gao Kao”), is becoming a controversial issue. It is the most critical exam in a students life, run over three days in June. Critics claim the exams only enforces route learning at the expense of creativity, and is biased against rural students. Photographs of a classrooms hooked up on intravenous drips have caused concern, as did the story of a Xi’an student only told of her fathers death once her exam had finished (Wong, 2012).

Private education offers alternatives: Private schools can offer alternatives from the rigid public system that can be internationally recognized alternatives.  The most prestigious education is at an international school in either America, England or Canada (Brennan, 2012). The employment market has a growing demand for graduates with an overseas education (Chen, L, Li, I & Rask, C 2012, p23). Schools in China that can offer a fast track to these schools are at an advantage, and in strong demand.

Conclusion: Despite the problems, Private Education has a strong future
There are growing concerns with the Chinese Public Education System being too unfair, too rigid, uncreative and too demanding for modern students. But there are also growing issues with the credibility and reputation of Private schools being only profit-orientated, with no long term commitment to China. There are schools in China that do operate this way, and their continued operation will damage the reputation of private education. Quality Assurance Systems, and better, more transparent management systems should improve these issues.

For private education providers, Product quality and management are issues needing address. The focus should be on consolidating curriculums with quality educators on long term contracts. Quality education requires a long term commitment. Relying on marketing and brand promotion is only a short term strategy.

The critical issue in China’s education market, is the lack of placements available at universities. In 2012 nine million students will apply for university, but only seven million positions are available (Wong, E 2012). This is an improvement on previous years, but the only solution to fill this shortfall is more private universities.

The Chinese economy will continue to grow and modernize. As Chinese society becomes more affluent and influential, it will be become more demanding and selective of both the Public and Private education systems.

The need and desire for private and international education continues to strengthen each year. With the shortfall of university placements, desire for international study and quality education, strong growth in private education is expected for many years. As long as these institutes keep the focus on quality, it should remain a growing, profitable and relevant industry.

Chen, L, Li, I & Rask, C 2012, Reflections on the Development of the Private Education
Industry in China 2012, Deloitte.

Wong, E 2012, Test That Can Determine the Course of Life in China Gets a Closer Examination, The New York Times, viewed August 12 2012, <http://www.nytimes.com/2012/07/01/world/asia/burden-of-chinas-college-entrance-test-sets-off-wide-debate.html?pagewanted=all>.