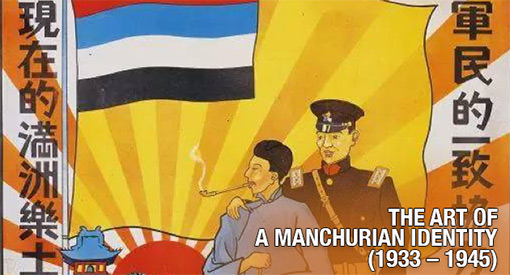 Changchun is a generic, homogenised Chinese city, almost as non-descript as every other second tier city in China. The city is a mix of the bustling new Chinese economy and the decrepit ‘rust-belt’ industries the north east was famous for. The few tourists that visit only use the city as a stop-over on their way to Changbai mountain on the North Korean border, or on their way along the trans Siberian railway. These few tourists would see little reason to venture out of their hotel rooms, but amongst the chaos of the Chinese streets, and the lit up international franchise stores, lies the relics of one of the largest utopian plans ever undertaken. For a brief ten years, Changchun was Xinjing (‘New Capital’), the capital of the new state of Manchukuo (Manchuria). For these ten years, it was the most modern city in Asia, and the centre for Japan’s Greater East Asia Co-Prosperity Sphere.

The State of Manchukuo is little more than a footnote in history, a “black hole no nation wants to claim (Kondayen, 2015). Its most remembered from the 1987 Bertolucci movie “The Last Emperor”. But for a short moment in time, this region of China was proclaimed a nation, and this “nation” required an identity for its inhabitants, prospective immigrants, and for the Japanese government, who needed to justify its expansion in this region.\

Modern day Manchuria makes up the three northeast (Dongbei) provinces of Heilongjiang, Jilin and Liaoning. Historically, this underpopulated region was populated by fierce nomadic horsemen with loose connections to China. By the eighteenth century these horseman became a powerful enough force to overthrow the Ming Dynasty and establish the final, Qing dynasty. By the beginning of the twentieth century, the Qing were in their final years, and Russia and Japan were looking to expand their empires into the resource rich, but still underdeveloped Manchuria.

By 1932, Chinese civil disorder, and Japanese investment and interest in the region led the ‘Mudken incident’, which (conveniently) gave the Japanese Kwangtung army justification to invade the region and declare the establishment of the Manchukuo state. The last Qing ruler Aisen Gori (Puyi) was proclaimed emperor. Manchuria sided with Japan in the Second World War, and by 1945, Russia declared war on Japan and invaded Manchuria. The Soviet army looted and pillaged everything of value in the highly modernised former country before leaving in 1948 (Endo, 2016). In the ensuing Chinese civil war, many decisive battles occurred in the region, including the 150 day Siege of Changchun, in which anywhere between 150,000 – 450,000 people died, making it one of the bloodiest battles in modern history (Gutenberg Press, 2017). The fall of Changchun was the turning point in the civil war, leading to Mao Zedong’s ultimate victory. In the post war era, it was an industrial heartland that is now suffering economic stagnation as the Chinese economy modernises.

The Government Identity – “Harmony Between the Races” 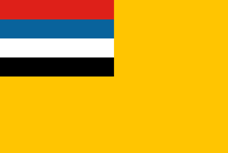 The legitimacy of the Manchurian state was essential for Japanese interests, so much priority was spent on establishing a unique national identity. The official slogan for the country was “Harmony between the races”. Japan was designated the superior ‘parent country’. The inauguration of the Puppet Emperor Puyi was an exact copy of the Japanese ceremony, making him both an emperor, but also (inferior) younger brother to the Japanese emperor Hirohito (McCormack, 2004).

Much of Manchukuo’s identity was about the diverse nationalities of the region, but the 1940 census showed of a total population of over 44 million, 94.2% were Chinese. Only 2.3% were identified with being Japanese, 3.3% Korean, 0.2% others, including Manchurians, Mongolians and Russians (Chao, Unknown)

The Manchukuo flag was predominantly yellow, with a small square consisting of four colour bars in the top left hand corner. It appropriated colours and symbols of the old Qing Dynasty, and the flag of Chinese republic from 1912 to 1928. Yellow was a colour traditionally associated with the Chinese emperor, while the five colours of the Chinese republic represented the five nationalities of China – Manchurians (Red), Han Chinese (Yellow), Mongolians (Blue), Muslims (White) and Tibetans (Black). For the Manchukuo flag, the predominate yellow symbolised unity, while the red, blue, white and black symbolised bravery, justice, purity and determination (Williams, 2006). 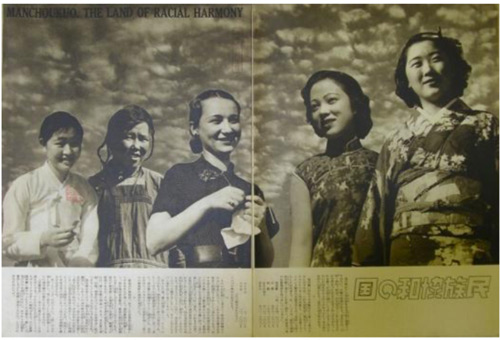 One of Japans targets in Manchuria were the natural resources. Images would emphasise the development of industry. Coal mines, agriculture and trains.

The South Manchurian Railway Company (SMRC) was founded in 1906 by two military administrators. Its primary function was to transfer Manchuria’s natural resources back to Japan. It also offered useful propaganda by promoting Japanese and international tourism, and sponsoring artists to visit Manchuria.

Japan in the 1930s was in economic crisis, overpopulated and social disorder. Manchukuo was depicted as a place of abundance and opportunity, where those struggling for opportunity might improve their position.

Manchuria was sold to the new Japanese middle class as an exotic travel location, with wild, open land, ancient mountains, and a multicultural society. A two-week tour of Manchukuo was expensive, costing many months salary for a white collar worker (Shepardson-Scott, 2012). One of the SMRC’s key publications was ‘Manchuria Graphis’, a pictorial magazine aimed at promoting Manchukuo as a site for exploration by upscale tourists and enjoyment of a sophisticated urban lifestyle This magazine depicted Manchukuo as both a rugged, romantic frontier, and a space of ultramodern urbanisation (Shepardson-Scott, 2012). Even the use of English on the cover suggested an international, cosmopolitan audience.

Manchu Graphis was a medium not only for promoting the Manchurian utopia, but also for artists like Fuchikami Hakuyo (1889 – 1960) to regenerate their own privileged, middle class fantasies of Manchukuo.

By the 1930s, the lines between fine art, reportage, advertising practises, and national propaganda began to blur (Shepardson-Scott, 2012). This meant the main artists in Manchukuo were photographers who also worked for corporations and the government. This could be explained by their dual role as propagandists. In Japan, the word for ‘propaganda’ can also be translated to mean ‘advertisement’ (Germer, 2011). For the Japanese artists in Manchukuo, it was a conveniently blurred line.

One of the leading photographers was Fuchikami Hakuyo (1889 – 1960). A noted photographer in Japan before his arrival in Manchukuo, Fuchikami Hakuyo aimed to depict the Manchukuo landscape as ‘an idyllic and exotic society, in which age old agricultural rhythms and ethnic traditions coexist harmoniously with grand industrial development projects” (Charrier, 2014).

Employed by the South Manchurian Railway as the head of its Public Relations Department (a powerful and influential position), he was the editor of Manchu Graph, and also founded the Manchuria Photographic Artists Association (MSSK) which was a collection of amateur Japanese photographers. The MSSK would often photograph seemingly random ‘common’ folk and settings, given the impression of social realism. However, MSSK photographs didn’t intend to capture reality, but rather impose a vision of a utopian society in which Japanese and Chinese, agriculture and industry, and tradition and modernity, are harmoniously reconciled” (Charrier, 2014).

In 1932, the year of Manchukuo’s founding, Fuchikami photographed ‘The Sun of a New Nation”.  The photograph was taken at sunrise, and shows a traditionally dressed Japanese farmer in the fields with a Chinese farmer in older, soiled, Chinese attire. Together with a pick and hoe, the two farmers would work together, while their stance suggests soldiers at attention. The text is neither Japanese or Chinese, but English, implying its international standing. The image became a propaganda poster for the Japanese Kwantung Army in the early years of Manchukuo. 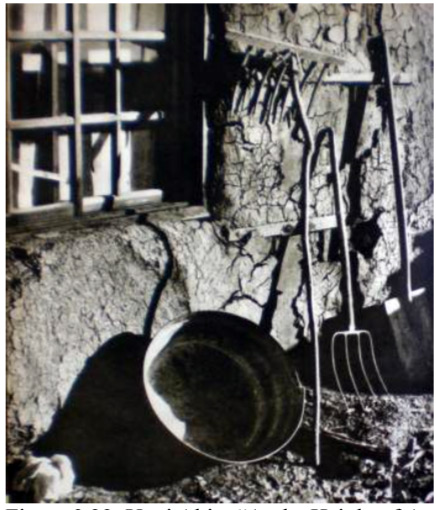 One of the most popular photograph’s of the MSSK was Yagi Akio’s “At The Height of Autumn” of 1939. As Japan prepared itself for war, and the country was filled of militaristic nationalism, this contrasting image of agricultural serenity showed the stillness of the Manchurian countryside and the implements of Japanese cultivation (Culver, 2013).  Alongside these idyllic settings were photographs of Manchukuo’s modernism. At the time, the Manchukuo trains were the fastest and most powerful in the world. In Tanaka Seibo’s “Locomotive” of 1937, the train has been removed from any special context, and almost fills the entire frame. The bulk and power of the engine disappear, as the train appears to float above its steam. There are no tracks, so its movement is limitless. The image is at once powerful in its monumentality yet atmospheric (Sheperdson-Scott, 2012). 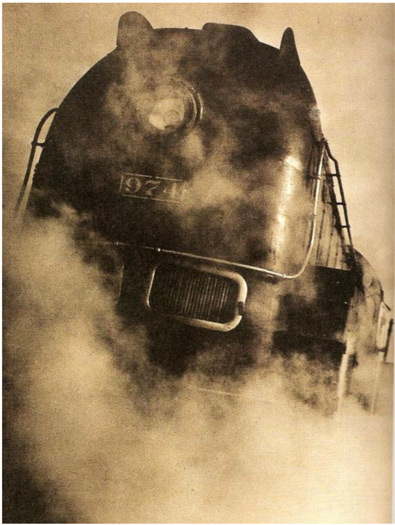 The Military – Respect and Authority

Most of the imagery in Japan depicted Manchukuo as a peaceful utopia despite China and Japan being effectively in a state of war from 1931 to 1945. The peaceful, safe and prosperous cities of Manchukuo came to operate as symbols of what must be defended; they were ideal extensions of the home front (Sheperdson-Scott, 2012).

The Kwantung Army was the largest, and most prestigious army group in the Japanese Army. They were responsible for the creation and governance of Manchukuo (Wikipedia, 2017). Much of the propaganda created by the Kwantung Army was to promote their legitimacy and authority. An example of their propaganda can be seen on a hand held fan. It scene is a quiet, spacious farm.  Soldiers are helping in the field while a Chinese and Japanese farmer pay homage to them while waving Japanese flags. The message being, respect the army, as it gives you the peace to live (Kondayen, 2015).

The ‘Nippon Kobo’ magazine was once a Bauhaus influenced arts and design photojournalist magazine in 1934, but was transformed into a pro-military publication by 1939. A 1939 special edition shows how art and propaganda combined. Cut out figures of the five races of Manchuria are shown in their native dress. The five nationalities all do agricultural work in the wide open spaces of Manchukuo, while the Japanese military stand ground in the centre, and frontier. The one character outside the frame is wearing the official Manchurian state’s ‘harmony clothes’ (Germer, 2011). The model wearing these clothes is Natori Yonosuke (1910-1962), the editor of the Nippon Kobu, and one of the leading modernist Japanese photographers and leading propagandist. “By placing beauty and aesthetics in the centre of his drive for perfection, Natori not only shared the regime’s colonial and untra nationalistic goals, but initiated and devised propagandist means of concealing them” (Germer, 2011) 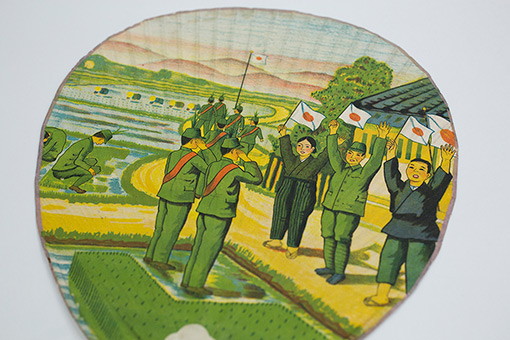 Conclusion – A Utopia That Never Was, Or Could Have Been

“It is the fantasy of culture that gives shape to many of the aesthetic and philosophical enterprises circulating around the fascist sign” (Ivy, in Tansman, 2010). By creating a myth of diversity and harmony, Japan hoped to whitewash over its invasion of the region.

For many Japanese settlers, the utopia ended in tragedy. As the Russian Army invaded, they were abandoned by the Kwantung Army, who ordered the settlers to defend while the army escaped. Poorly equipped, their choices were surrender, be massacred, or group suicides. Those who survived were evicted from their lands, and died waiting for promised transportation that never arrived. Others were starved and murdered along the long roads to Korea. Of an estimated population of under two million Japanese, 67,000 died within the first few months of surrender, and over 300,000 remain unaccounted for (Sheperdson-Scott, 2012).

Despite this sad ending, there are still many romantic and nostalgic feelings for the era in Japan. At the time, Manchuria was a poor and underpopulated part of a China embroiled in a bloody civil war with no end. Japanese investment into Manchukuo made the cities and industries amongst the most modern in the world. However, the most telling, and damning evidence of Japans intentions in Manchuria was, despite the abundance of imagery showing happy farmers tending their fields, posters promoting the harmony of five nations, and sophisticated city living, the only art sponsored and promoted, was Japanese. As Culver (2013) concludes, it was the state sponsored Japanese artists that were promoted, rather than a unique Manchurian culture.

Gutenberg Press. List Of Battles By Casualties. 2017, Retrieved from http://gutenberg.us/articles/List_of_battles_by_casualties